For large numbers of peoples in the world, the decline of Europe meant their liberation. On his recent state visit in China, President Macron confidently stated ‘France is back. Europe is back.’ It is good for the European Union to stake out its own place in the world and develop an independent foreign policy. However, when we Europeans build this future, we have to grapple with the fact that, for many in the world, ‘imperial’ Europe does not refer to imagined ‘EUSSR’ horror scenarios the eurosceptics love to conjure up—but to imperial Europe, coloniser of much of the world.

The process of decolonisation is only a recent one, more recent than the horrors of the Second World War. Many African and Asian colonies only got their independence in the 1960s and 1970s. In East Asia, the Sultanate of Brunei became fully sovereign in 1984. Hong Kong lost its Crown Colony status as short ago as 1997. Liberation from European overlordship was often paid for dearly, with incredibly costly wars, both in terms of people killed and physical destruction. The Indonesian Revolution (1945–9), the Algerian War (1954–62), and the Portuguese Colonial War (1961–74) are only a selection. These bloody struggles were merely the closing episode to centuries of oppression, exploitation, and genocide. Europe—unlike settler colonies such as the United States—benefited from the physical remoteness of the violence in that it can keep it separate from its societies, but that ‘colourblindness’ has also desensitised it to the fact that for the formerly colonised the brutalities are all too salient still. 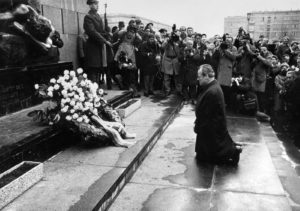 Before its neighbours would allow Germany to play a leading role again in Europe after the atrocities of the Second World War, the country had to follow a long path of atonement. Without the movement in the 1950s and 1960s that forced the Federal Republic to deal honestly with its past, Germany today would not only have been an entirely different country, but its eventual reunification would have been in question. The most powerful symbol of this atonement was the 1970 genuflection by Chancellor Willy Brandt (the Warschauer Kniefall) before the monument to the Warsaw Ghetto Uprising. It mattered tremendously that the leader of West-Germany fell to his knees in the face of millions of death, not just because it symbolised accepting collective guilt, but maybe even more so the fact that it demonstrated a common European understanding of these past deeds as monstrous crimes.

The Holocaust and other nazi aggressions are unequivocally accepted as extreme crimes against humanity, by Germany and by its former victims. This fact reassures those countries, because this shared judgment means that a reformed Germany can be engaged without fearing that it will do the same again. (On a side note, this fact is also why the current Polish meddling with the common narrative is so potentially dangerous.) There does not exist, however, such a common agreement between Europe and its former victims on its past crimes.

During the campaign for the 2017 French presidential elections that ended with him in the Palais de l’Élysée, Emmanuel Macron was ferociously attacked by the centre-right contender after Macron had admitted France that had committed crimes against humanity in Algeria. Opponent François Fillon claimed that France should not be blamed for ‘partager sa culture’, sharing its culture. UK Foreign Secretary Boris Johnson saw no issue with reciting imperial poet Rudyard Kipling while on an official tour of a Buddhist temple in Myanmar, and has in the past suggested the recolonisation of Africa. There is no universal agreement in Europe about the fact that in scale of destruction and intensity of violence colonialism in a certain view went far beyond what the Holocaust has done to Europe. There is certainly not a shared narrative with its former victims.

In a speech on the Dutch history in what since 1945 is Indonesia, the Dutch Prime Minister stressed the need for a common history before one can move forward. A similar motive underlies flagging attempts to write an ‘East Asian’ history textbook with Chinese, Japanese, and South Korea involvement. However, passively waiting for such agreement to spontaneously arise will not do. The Warschauer Kniefall is an example of how grand gestures can contribute to a closer understanding. Perhaps former European colonisers should start considering symbolic ways to move towards recognition of the perspective of the colonised. Until then, these countries should not be surprised if the West’s Rest is not jumping for joy at the thought of a European revival.

Europe can proudly proclaim to be back on the world stage, but currently it would do so unaware that to others this would sooner bring back nightmares than cause jubilation.